In the year 1219 the Danish King Valdemar Sejr (the Victorious) went on a crusade to Estonia. On June 15 there was a great battle at Lyndanisse. The situation was bad for the Danes and humbly the King asked for God’s assistance. According to legend the Danish flag, Dannebrog, then fell from the sky and a voice from heaven told the Danes they would be victorious under this sign.  And so they were.

Danes are very fond of their flag and use it whenever there is an occasion.

Most Danes use a garland of Danish flags as an ornament on their Christmas tree.

I include patterns for the various variations I chose for my own tree. They are not all quite authentic. In replacement for the Queens emblem I put the head of Medusa painted by Nicolai Abildgaard on his fabulous fire screen “Templum Fortunæ” from 1785. 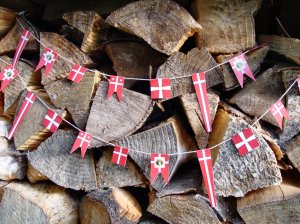 One thought on “Valdemar’s Day”

The book is also available in French